Multiple Properties behind the Façade

Although the façade of the Palazzo Rucellai in Florence gives the appearance of a single palace, Giovanni Rucellai purchased seven different properties both on the street and behind it.  Those behind the first five bays were acquired between 1428 and the mid-1440s, and those behind the latter three bays were obtained in 1458.

(Because Medieval palaces were narrow and often only one- or two-bays wide, having a large palace generally required purchasing several adjoining properties, which could be connected internally, remodeled, or torn down.)

Based on documentary and stylistic evidence, the design of the façade of the Palazzo Rucellai, which is the palace's only significant feature, has been attributed to both Leon Battista Alberti and Bernardo Rossellino.  Around the time the façade was built, Bernardo was involved with remodeling the pre-existing palaces into one and adding a courtyard.  The palace's composite capitals suggest the work of Alberti, who favored that order.

Alberti and Rossellino worked together on projects in both Florence and Rome, and the latter's design for the Palazzo Piccolomini in Pienza was very similar to that of the Palazzo Rucellai.

On the basis of his brilliance as an architectural innovator, Alberti is generally assumed to have been the designer and Rossellino the on-site builder.

Documentary evidence, the existing façade's lack of symmetry, and the inferior workmanship of the stone work on the two bays at the right end confirm that Alberti's original design was five-bays wide and that the right two bays were added after the Rucellai family acquired the property next door in 1558.

The unfinished edge of the masonry suggests that the acquisition of another property had probably been planned.  The completion of an eighth bay on the right would have achieved symmetry despite the lack of a central door.

The Rucellai family's identity is referred to by several devices.

The pattern ornamenting the frieze at the top of the second story is a wind-filled sail, a reference to Fortune's sail.  The family fortune and name began with a family member who learned the secret of making a rich purple dye while on a Crusade in the near East.  Florentine textiles became noted for this color, which is called "orchil" for its principal ingredient--orchil lichens.  The family adopted the name "Orcellai," which later became "Rucellai."

Three intertwining rings are carved on the upper part of the window frames.

Diamond rings, each with two feathers, appear on the lower frieze.  These devices were also Medici emblems, and their inclusion on the Rucellai façade may reflect the marriage of Giovanni Rucellai's son, Bernardo, to Piero de' Medici's daughter, Nannina.

Several features of the Palazzo Rucellai were derived from Roman sources.

The use of the orders to articulate structure was typical of ancient Roman architecture.

The Colosseum and the Theater of Marcellus in Rome served as models of multi-story applications of the orders, called supercolumnation or superimposed orders.  The Rucellai Palace is similar to the Colosseum in its implementation of superimposed orders, but different in its arrangement of the orders and column form.  The sequence of orders on the Colosseum is Doric, Ionic, and Corinthian for the engaged columns of the first three stories and Corinthian again for the pilasters on the fourth story, whereas the sequence at the Rucellai Palace is Tuscan, Composite, and a less decorative style of Corinthian, and only pilasters were used.

The criss-cross pattern of the masonry of the base of the façade resembles opus reticulatum, a form of stonework that had been used by the Romans to face concrete.  It utilized pyramidal stones that were inserted point-first into wet concrete at a diagonal angle.  The stones not only covered the concrete surface but also added stability to it.

Alberti, who probably did not realize that this treatment had been functional in Roman times, imitated the appearance of opus recticulatum to add textural variety and what he considered to be authenticity.

Several features of the Palazzo Rucellai reflect Florentine traditions as exemplified by the newest and most influential of Florence's palaces, Michelozzo's Palazzo Medici.

Alberti adopted the Florentine practice of using rustication for decorative effect, but his approach to rustication differed from that used on other Florentine palaces, where contrasts in texture from story to story were exploited.

Alberti used the same form of masonry on all three stories, which varied from each other in height and column order.

The use of dressed-stone and prominent joints indicating randomly sized blocks corresponds to blockwork seen on the piano nobile of the Palazzo Medici.  Many of the joints of the masonry at the Palazzo Rucellai, however, were made by carving grooves into large dressed slabs.

Several features of the Palazzo Rucellai were typical of Florentine palaces.

Alberti's approach to designing a large, multistory façade incorporated the Roman manner of articulating the structure with an ornamental scheme of superimposed orders.  He reduced the plasticity by using pilasters instead of engaged columns.

Alberti used rustication for decorative effect, but instead of contrasting different forms of rustication in the Florentine manner, he used the same form on all stories.

Fusing the Orders and Rustication

By using the orders as pilasters in a flat, linear manner, Alberti fused supercolumnation and rustication into a net-like pattern that unifies all parts of the façade into a single whole.

Although it had few immediate followers in Florence, the Palazzo Rucellai was extremely influential.  Of primary importance was the decorative use of the orders on façades, which could be seen in Pienza and Rome in the late-fifteenth century.  The use of the orders on palace façades became common in sixteenth-century Rome, and from there it spread north to other parts of Italy.

See visual summary by clicking the Views button below. 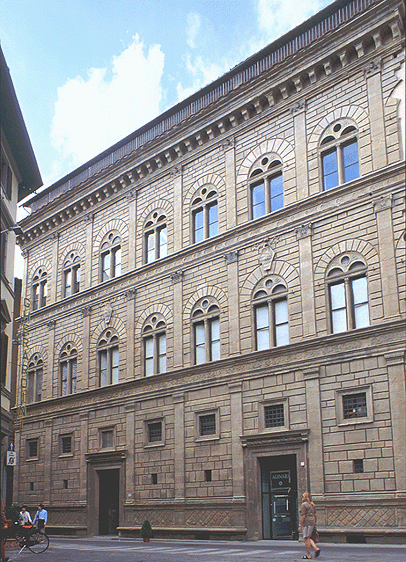