Pope Pius V was born Antonio Ghislieri in 1504 in Bosco Marengo, near Alessandria in northern Italy.

Although his parents were of noble lineage, they were poor at the time of his birth, and Antonio had to work as a shepherd in his early years.  His intellectual gifts were noticed by a wealthy neighbor who sponsored his education under the Dominicans at the monastery at Voghera.

Michele studied in Bologna and was ordained in Genoa in 1528.  He spent his early years in the Church serving the Dominican order.  He lectured on philosophy and theology in Pavia for sixteen years.  During this period, he served as the prior of several monasteries and trained novices.

Participation in College of Cardinals

Cardinal Alessandrino developed a reputation for integrity when he opposed two candidates for the College of Cardinals proposed by Pius IV, who wished to accommodate his allies.

Compared to the preceding elections, the various factions at work during the conclave that elected Pius V were less unified in their support of particular candidates.

Cardinals Farnese and d'Este continued to oppose each other while working together to form a more influential block.

The assembly looked to the widely respected Cardinal Carlo Borromeo, nephew of Pope Pius IV, for leadership.  He refused the papal crown for himself and supported several candidates during the enclave.

In the end, Cardinal Borromeo supported Cardinal Alessandrino, whose piety and integrity were beyond question.

On being elected pope, Michele Ghislieri took the name Pius V in honor of his predecessor and of Cardinal Borromeo, who had been instrumental in Ghislieri's election.

Ghislieri's election was met with a mix of joy and concern.  Among many of the cardinals his election was received positively, his severe character and will welcomed as appropriate for the times.  Others saw his stern reputation in a less rosy light, and were concerned what effect his rigor would have, particularly on the city of Rome.

Since his youth, Pius V's piety and devotion to God were above reproach.

As an ascetic, Pius I practiced self-denial of worldly pleasures and embraced hardships like fasting, performing long meditations on his bare knees, wearing a hair shirt under his clerical robes, traveling on foot and without a cloak, sleeping on a straw bed, and taking meals alone and in silence, which became a papal practice that was continued into the early twentieth century.

Pius V was always generous with the poor.  When he was elected pope, he suspended the festivities that usually accompanied papal inaugurations and gave the money allotted for it to the poor.

Pius V was severe and harsh in dealing with heresy.  Like Paul IV, he attended sessions of interrogation and torture under the Inquisition.  He entreated Philip II to show no mercy in dealing with heretics and directed the French general who worked for Regent Catherine de' Medici to kill all Huguenots. (French Protestants)

Although he was persuaded to promote an especially capable nephew to the level of cardinal, Pius V did not practice nepotism.

Pius V's primary goal was to reform the Church by enforcing all the rules and policies recommended by the Council of Trent, which had closed only two years earlier.  His enforcement extended to America and Africa.

The pope's single-mindedness in following the Tridentine recommendations (the adjective 'Tridentine' referring to the Council) did much to change the character of the Church and its various institutions.

Many of the documents used in the Church were re-written in accordance with the goals of reform.

The Vulgate (St. Jerome's Latin translation of the Old Testament) and the Greek New Testament were revised according to improved scholarship and discoveries from other previously unknown Biblical manuscripts.

Pius V conducted a review of the Orders.  Changes were recommended to some, and the Humiliati were abolished.

Pius V, who had himself been involved with training Dominican novices, established new seminaries for the instruction of entrants to the clergy.

At the beginning of his pontificate, Pius V called for the clergy to return to their ecclesiastic residences and cease living lives of worldly pleasures.

Pius V drastically reduced the size of the papal court and eliminated all signs of lavish living like feasts and entertainment.

The pope enforced the ban on buying and selling Church offices and drastically reduced corruption in the Curia, the papal administration.

Pius V, like Paul IV, was especially influenced by the teachings of the thirteenth-century theologian Thomas Aquinas, whom he elevated to the status of "Doctor of the Church" in the 1568 breviary.  (The four Latin Doctors of the Church are St. Gregory the Great, St. Ambrose, St. Augustine, and St. Jerome.)

In 1570, he published a new edition of Aquinas' writings.

ZEALOUS USE OF INQUISITION

Soon after his election, Pius V ordered that the palace built by Paul IV to house the Inquisition, which had been destroyed by rioters upon Paul's death, be rebuilt.

Pius V's excessive zeal for rooting out individuals holding unorthodox beliefs led to the arrest, torture, execution of many citizens of the Papal States.  Relatively fortunate others had their property confiscated.  Even the mentally challenged were tortured if their answers failed to persuade interrogators of their orthodoxy.

The pope also persuaded foreign leaders such as Philip II of Spain and Catherine de' Medici of France to take a similarly hard line against heretics.

Pius V attempted to reform the public as well as the clergy by enforcing existing laws, passing new laws, and encouraging informants to report crimes committed by their fellow-citizens.

Critics at that time complained that the pope was trying to make Rome into a monastery.

Blasphemy, committing impious acts or vocalizing impious utterances, was punished by fines for the rich and by flogging for the poor.

Pius V forced Jews to sell land they had acquired during the papacy of Pius IV.  He then published a bull ordering all Jews to leave the Papal States.  Subsequently, an exception was made for the cities of Rome and Ancona, where the Jewish contribution to the economy was critical and their departure would have caused serious financial difficulty.

Those who were allowed to remain, had to stay in ghettos.  (The practice of isolating the Jews in ghettos in the Papal States had been established under Paul IV.)

The pope ordered Rome's prostitutes to leave.  Those who stayed were enclosed in a ghetto near the Tiber's Ripetta port.

To strengthen the sacrament of marriage, Pius proposed executing adulterers, but this measure was not passed.

Denying Medical Care to the Unconfessed

Pius V encouraged frequent confession by passing a law that only people who had confessed in the past three days could receive medical care.

Pius V angered European leaders by issuing a bull (papal order), In coena Domini, making claims of greater authority than he had.

Pius took a stern, unyielding stance on religious issues.  His inflexible stands exacerbated the violence directed toward heretics in Catholic regions and toward Catholics in Protestant regions.

In 1570, Pius V excommunicated Queen Elizabeth I, who supported the Anglican Church in England.  During Elizabeth's reign, many Catholics were persecuted, and Mary, Queen of Scots, was executed because she was the focus of plots by Catholic rebels to overthrow Elizabeth and put her Catholic cousin on the throne.

Pius V clashed with the Spanish king, Philip II, over the issue of authority over the Church in Spain.  In Spain, the Church was under control of the state, and the pope attempted to reassert his sovereignty.  Similar issues troubled the papacy throughout the fifteenth and sixteenth century in their relationships with the major Catholic powers, including France and the Holy Roman empire.

With Pius V's encouragement, Philip II vigorously prosecuted heretics, often burning them publicly.  The entire ceremony leading up to and including the execution was known as an auto-da-fé (act of faith), a term that in English has become synonymous with execution by burning.

Pius V clashed with Emperor Maximilian II (1564-76), the emperor of the Holy Roman Empire.  Maximilian II honored the Peace of Augsburg, which allowed for the practice of either Catholicism or Protestantism in each principality according to the ruler's religion, which Pius saw as an overt tolerance of Protestantism.

Maximilian was also displeased with the pope's usurpation of his authority.  The pope passed a judgment in a dispute between the dukes of Florence and Ferrara that was to have been decided by the emperor.  Maximilian felt that the pope also overstepped his authority when he awarded the title of Grand Duke of Tuscany to the Medici Duke Cosimo I in 1569.

Fighting the Huguenots in France

Pius V gave money to Catherine de' Medici, the Regent of France in the 1560s, to fund the fight against the Huguenots (French Protestants), but on the condition that the Queen not agree to a settlement with the Huguenots.  The pope instructed the French commanders not to take prisoners.

The pope was eventually disappointed when her son, King Charles IX, signed the Peace of Saint-Germain in 1570, which provided religious freedom.

Defeating the Turks at Sea near Lepanto

Despite his poor relationships with foreign leaders, the pope was successful in organizing a Holy League to oppose the Turks.  The League included Spain, Venice, and the Papal States.

Under the leadership of Don Juan of Austria, the League's troops were overwhelmingly victorious in 1571 at the Battle of Lepanto, a confrontation at sea involving hundreds of ships.  The Turks had a larger fleet, but the League was far better equipped with artillery as they had more than double the number of cannons than their opponents.

This battle marked the turning point of Europe's efforts to reverse the Turkish attempts to expand toward the Italian peninsula and European mainland.

The pope was initially buried in St. Peter's in the Chapel of Saint Andrew.

In 1588, his tomb was moved to Santa Maria Maggiore by Pope Sixtus V.

In 1672, Pius V was beatified in recognition of his important role in reforming the Church.  Beatification, the first step toward sainthood, involves a declaration that the deceased has entered Heaven and is able to intercede on behalf of individuals' prayers.

During Pius V's pontificate, the proposals for change, which had been evolving over the previous three decades, were enacted.  Although stringent, most of the changes introduced at this time were believed to be what was needed to restore the Church's integrity.

Pius V shared these and many other negative qualities with his principal benefactor in the Church, Paul IV of the Caraffa family.  Both were harsh ascetics who expelled or isolated the Jews and alienated foreign leaders by insisting that they constantly battle Protestants.

One of Pius V's questionable actions was retrying the nephews of Paul IV, his principal benefactor in the Church.  Although they had already been executed, reversing the judgment cleared their names and enabled their families to recover property confiscated by the Church.

Reversing the verdict was unpopular both at home and abroad, and it is hard to see why the pope re-opened the cases in view of the fact that the Caraffa nephews had committed crimes so heinous that their own uncle had banished them.

In addition to continuing many of the repairs and improvements in Rome begun by his predecessor, Pius V commissioned a tomb for him and a new facility for the Inquisition.

Commissions at the Vatican

Removal of Worldly Art and Architecture

Pius V found nudity offensive and inappropriate for use in religious or public settings. 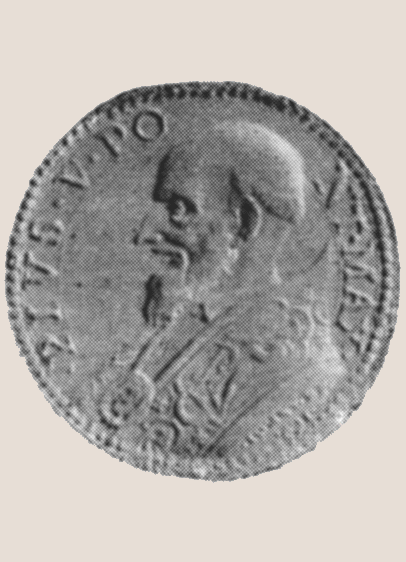